The current frameworks for object detection task can be categorized into two main types. One category of frameworks uses a two-step pipeline – first it generates region proposals using improved algorithms other than sliding windows, then passes the regions to CNN and SVM for feature extraction followed by classification and localization. The other category unifies the region proposal generation and classification and regression task as one multi-task learning problem. The two-step pipeline methods mainly include R-CNN, Fast R-CNN, Faster R-CNN, R-FCN, FPN, SPP-net etc. The unified methods include Multibox, YOLO, YOLOv2, SSD, DSSD, DSOD etc.

SSD is a one-step framework that learns to map a classification-and-regression problem directly from raw image pixels to bounding box coordinates and class probabilities, in single global steps, thus the name “single shot”. Fig. 1 illustrates the architecture of SSD. It incorporates a Deep Convolutional Neural Network as the base feature extractor similar to Faster R-CNN. However, the fully-connected layers from the extractor is discarded and replaced by a set of auxiliary convolutional layers as shown in blue. These auxiliary layers are responsible for extracting features at multiple scales and progressively decrease the size of the input at each subsequent layer. Instead of generating anchor boxes at each feature map separately like in Faster R-CNN, SSD generates anchor boxes directly on the multi-scale feature maps coming from the base CNN.

In SSD (ECCV 2016), authors have used six auxiliary layers for producing feature maps of size 8 × 8, 6 × 6, 4 × 4, 3 × 3, 2 × 2 and 1 × 1 respectively. Due to multiple scaling, generated anchor boxes better cover all the diverse shapes of objects including very small objects and very large ones. Features extracted by each region proposal or anchor from each feature map is simultaneously passed to a box regressor and a classifier. Finally, the network outputs coordinate offsets of predictions relative to anchor boxes, objectness score (here confidence score) of each predicted boxes and probabilities of an object inside a predicted box being each of the ​\( C \)​ classes. For instance, for feature maps of size ​\( f = m \times n \)​, ​\( b \)​ anchors per cell in each of the feature maps and \( C \) total classes, SSD will output total ​\( f \times b \times (4 + c) \)​values for each of the six feature maps. Anchors boxes are generated with different aspect ratios and scales similar to Faster R-CNN, however, due to applying them on multiple scaled feature maps objects with more variety of sizes and scales are detected more accurately.

Integrating with some pre and post-processing algorithms like non-maximum suppression and hard negative mining, data augmentation and a larger number of care- fully chosen anchor boxes, SSD significantly outperforms the Faster R-CNN in terms of accuracy on standard PASCAL VOC and COCO object detection dataset, while being three times faster.

As mentioned earlier, SSD framework is a single feed-forward convolutional neural network which performs both object localization and classification in a single forward pass. However, the whole network is composed of six major parts or algorithms and each of them plays crucial role in providing the final output.

SSD architecture is based on a deep CNN which works as the feature extractor. Deep CNNs has showed high performance in image classification on many benchmark datasets, which indicates that the features learned by these networks can be very useful in performing other more sophisticated computer vision tasks like object detection as well. In case of real-time inference, MobileNet is a widely used Deep CNN which is at least 10 times faster than its contemporary regular deep CNNs like VGGNet-16, when run in both GPU and CPU.

In MobileNet model, each standard convolutional layer is replaced by two separate layers called a depthwise convolution followed by a pointwise convolution, combinedly called as depthwise separable convolution. A standard convolution layer both filters and combines inputs, no matter how many channels it has, into a new set of single channel output pixels in one step. Whereas the depthwise separable convolution splits this process into two layers, a separate layer for filtering independently on each channel and a separate layer for combining the filtered channels into a single output channel. This factorization has the effect of drastically reducing computation and model size, therefore resulting in a very fast model for real-time performance. 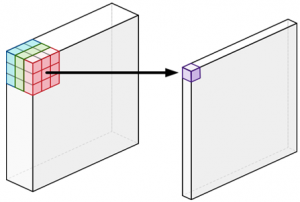 Whereas the number of computation required by depthwise separable convolution is following (7 times faster),

The original MobileNet architecture uses one regular convolutional layer in the first layer and 13 consecutive depthwise convolution layers each followed by a point-wise separable layer. Batch Normalization (BN) and ReLU activation function are applied after each convolution. After the convolutional layers, there is an Average Pooling layer of kernel 1 × 1 followed by a Fully-connected layer linked to a softmax classifier for classification. Complete architecture of MobileNet is described in the original paper.

For object detection task, original base extractor is extended to a larger network by removing and adding some successive layers. From the MobileNet architecture, the last fully-connected layer is discarded and a set of auxiliary convolutional layers are added which are called convolutional box predictor layers. These layers produce multiple feature maps of sizes 19 × 19, 10 × 10, 5 × 5, 3 × 3 and 1 × 1 in successive order which are stacked after the feature map coming from the last convolutional layer of MobileNet of size 38  ×  38. All six auxiliary layers extract features from images at multiple scales and progressively decrease the size of the input scan to each subsequent layer. Performing convolution on multiple scales enables detecting objects of various sizes. As example, feature maps of size 19 × 19 performs better in detecting small objects whereas 3 × 3 performs better for larger objects. Each of the box predictor layers is connected to two heads, one regressor to predict bounding boxes and one sigmoid classifier to classify each of the detected boxes. Let’s consider an input image as shown in Fig. 3. The image has three classes of objects, namely as “person”, “car” and “vase”.

Fig. 4 shows the SSD architecture that consists of base feature extractor and auxiliary predictor layers. Each layer predicts some bounding boxes for the class person. Eventually predictions from all the layers are accumulated in the post-processing layer which provides the final prediction for person as the output. The same procedure follows for each of the classes present in the input image.

Priors or anchor generation is one of the most important tasks that can significantly affect the overall model performance. Priors are a collection of pre-defined boxes overlaid on the input scan as well as the predictor feature maps at different spatial locations, scales and aspect ratios that act as reference points for the model to predict the ground truth boxes. Ground truth boxes are the boxes that are annotated by human while labeling the dataset. Prior boxes are really important because they provide a strong starting point for the bounding box regression algorithm to predict the ground truth boxes as opposed to starting predictions with completely random coordinates. Each feature map is divided into number of grids and each grid is associated to a set of priors or default bounding boxes of different dimensions and aspect ratios. Each of the priors predict exactly one bounding box. In the following example, there are priors of six aspect ratios for each grid cell in each of the six feature maps. As shown in Fig. 5, each grid cell of a 5 × 5 feature map have six priors which mostly matches with the classes or objects we want to detect. As example, red priors are most likely to capture car whereas blue priors are there to detect person and vase of both smaller and larger sizes. Also, feature maps represent the dominant features of the images at different scales, therefore generating priors on multiple scale feature maps increase the likelihood of any object of any size to be eventually detected, localized and appropriately classified.

Among a large number of priors, only a few will be matched as positive samples and rest of the large number of priors will be left out as negatives. From the training point of view, there will be a class imbalance between positive and negative samples which may make the training set biased towards negatives. To avoid this, some of the negative examples are randomly sampled from the negative pool in such a way so that the training set have a negative to positive ratio of 3:1. This process is called hard negative mining. The reason why it is required to keep negative samples is because the network also needs to learn and be explicitly told about the features that lead to incorrect detection.

At the prediction stage while both training and inference, every prior will have a set of bounding boxes and labels. As a result, there will be multiple predictions for the same object. Non-maximum suppression algorithm is used to filter out duplicate and redundant predictions and keep the top K most accurate predictions. It sorts the predictions by their confidence score for each class. Then it picks predictions from the top and removes all the other predictions that have IoU greater than 0.5 with the picked one. In this way, it ends up with having maximum one hundred top predictions per class. This ensures that only the most likely predictions are kept by the model, while the more noisier ones are discarded. Fig. 7 shows complete SSD architecture with the non-maximum suppression layer which filters out all the less accurate predictions and generating the one as output with the highest confidence score.

Now that we know about all the individual components, it is time for training this whole framework. As mentioned earlier, because it is a one-step feed-forward end-to-end learning model, all of these components are trained simultaneously at each single iteration. The training process is explained in the next part Training Single Shot Multibox Detector.